The race is on: who will host the EMA?

While the UK is preparing to leave the European stage, 19 countries are lining up to host the prestigious European Medicines Agency (EMA), currently based in London. Sweden hopes to welcome the agency with its 900 employees in Stockholm, but faces fierce competition from cities like Amsterdam, Copenhagen, Lille and Vienna.

The clock is ticking, since facilities must be up and running at the new location before the actual Brexit date of the 30th of March 2019.  After making an initial assessment of the offers, the European Commission (EC) will have a first meeting later this month. All 27 EU member states are then asked to cast their votes and by the end of November, Europe will have a decision. [http://www.consilium.europa.eu/en/policies/relocation-uk-based-agencies/ema/; http://www.consilium.europa.eu/en/policies/relocation-london-agencies-brexit/]

Risk of permanent damage if employees leave the agency

The relocation of the EMA is a delicate issue. The agency needs to be able to continue its high priority tasks, such as new drug approval and safety monitoring and make sure delays for lower priority tasks are kept to a minimum. In their business continuity plan [http://www.ema.europa.eu/docs/en_GB/document_library/Other/2017/09/WC500235516.pdf], the agency already expects delays in the development of the European Medicines web-portal and transparency road map. One of the most important factors in ensuring disruption stays at that, and otherwise provide continuity, is by controlling staff retainment and recruitment. This depends not only on overall staff policy and conditions, but also on which specific country the move will go to.

The EMA has performed an internal survey where employees were asked to rate how likely they were to stay with the agency for each of the candidate cities. The survey had a completion rate of 92%. In the survey report no cities are identified [https://endpts.com/facing-a-staffing-crisis-ema-says-new-drug-approvals-might-be-delayed-for-two-years-after-its-post-brexit-move/], however, Reuters [https://www.reuters.com/article/us-britain-eu-ema-amsterdam/eu-drugs-watchdog-staff-favor-move-to-amsterdam-sources-idUSKCN1C211O] suggests that Amsterdam is the top-choice among employees followed by Barcelona and Vienna. Milan and Copenhagen are ranked number 4 and 5.

On the other end of the spectrum, EMA staff indicate that they are unlikely to pack their bags for cities such as Sofia, Zagreb, Bucharest and Bratislava. A move to any of the lower ranked cities risk to damage the functioning of the agency. As the EMA stated [https://endpts.com/facing-a-staffing-crisis-ema-says-new-drug-approvals-might-be-delayed-for-two-years-after-its-post-brexit-move/]: “For certain locations staff retention rates could be significantly less than 30% [retention]. This would mean that the Agency is no longer able to function and, as there is no backup, this would have important consequences for public health in the EU.” The report continues to say that full recovery may be impossible to achieve without a permanent damage to the system. The agency expects that even cities with high expected retention rate (above 65%) may need 2-3 years to full recovery. Only the top five cities are judged by the EMA to be able to retain enough employee to continue with the highest priority tasks. [http://www.ema.europa.eu/docs/en_GB/document_library/Other/2017/09/WC500235516.pdf]

While many countries are eagerly awaiting the final decision, several assessments have already been done. In March this year, KPMG Switzerland published a report ranking different host candidates [https://home.kpmg.com/content/dam/kpmg/dk/pdf/DK-2017/04/ema-europe-location-assessment-kpmg.pdf]. Taking into account the size of life sciences, the research and scientific environment, connectivity, authorities and the attractiveness for families of staff, they gave Paris the highest rank of all cities, followed by Copenhagen, Stockholm, Munich and Amsterdam. Of these five top contenders, only Copenhagen, Stockholm and Amsterdam actually submitted an application. France instead applied for Lille and Germany for Bonn.

Meanwhile, the EC released their own assessment of the 19 bids [https://ec.europa.eu/info/about-european-union/relocation-uk-based-eu-agencies], but did not assign points to the bids. The following criteria were used [http://www.consilium.europa.eu/en/policies/relocation-uk-based-agencies/ema/]:

No ranking is provided, nor are offers validated by the EC (information in bids are presumed accurate and valid). A good summary of the different bids are given in https://ec.europa.eu/info/sites/info/files/ema-relocation-general-assessment-summary.pdf.

Further important features for top contenders is prior experience with EMA work and the number of European agencies the country already hosts. A compilation of the number of centralised assignments as rapporteur, tasked to assess reports for the CHMP, handled by a national health agency between January 2015 and February 2017 shows that, excluding the UK, Sweden handled most applications [https://www.dn.se/ekonomi/hard-strid-om-att-bli-nya-hemstad-for-eus-lakemedelsverk/]. This while Sweden today only hosts one EU agency. Germany is the second most frequent rapporteur, with two current EU agencies located within their borders. The Netherlands is third, but with its relatively small size, already hosts two other agencies [https://ec.europa.eu/info/sites/info/files/ema-relocation-general-assessment-summary.pdf]. (see Figure 1). 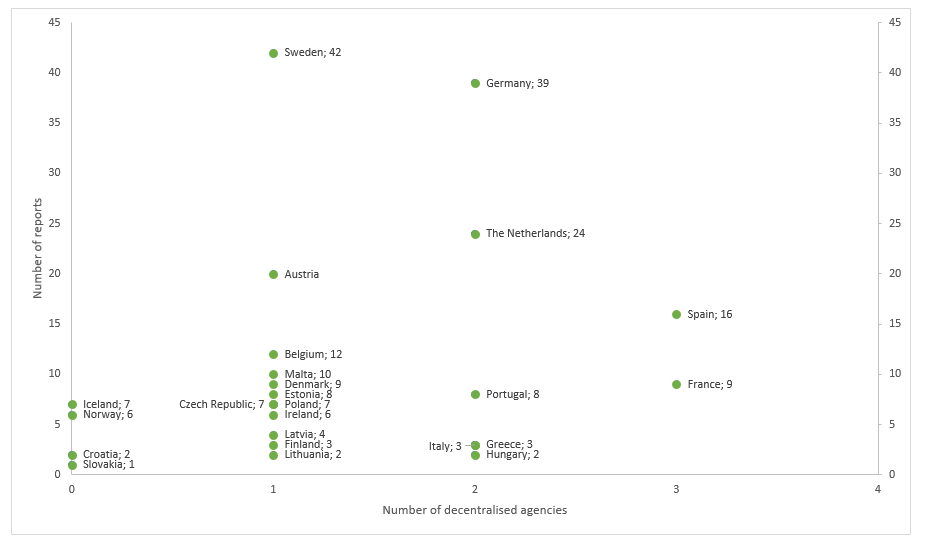 Apart from Stockholm, Amsterdam must be seen as a serious contender to host the EMA. Barcelona on the other hand might be unlikely to win given the latest developments in Catalonia, despite popularity among EMA staffers.

But as much as we love to analyse the data, it is all speculation at this point. It remains a political decision, with contestants lobbying to ensure votes. At Quantify we are counting down until the vote on November 20th, the game is on!